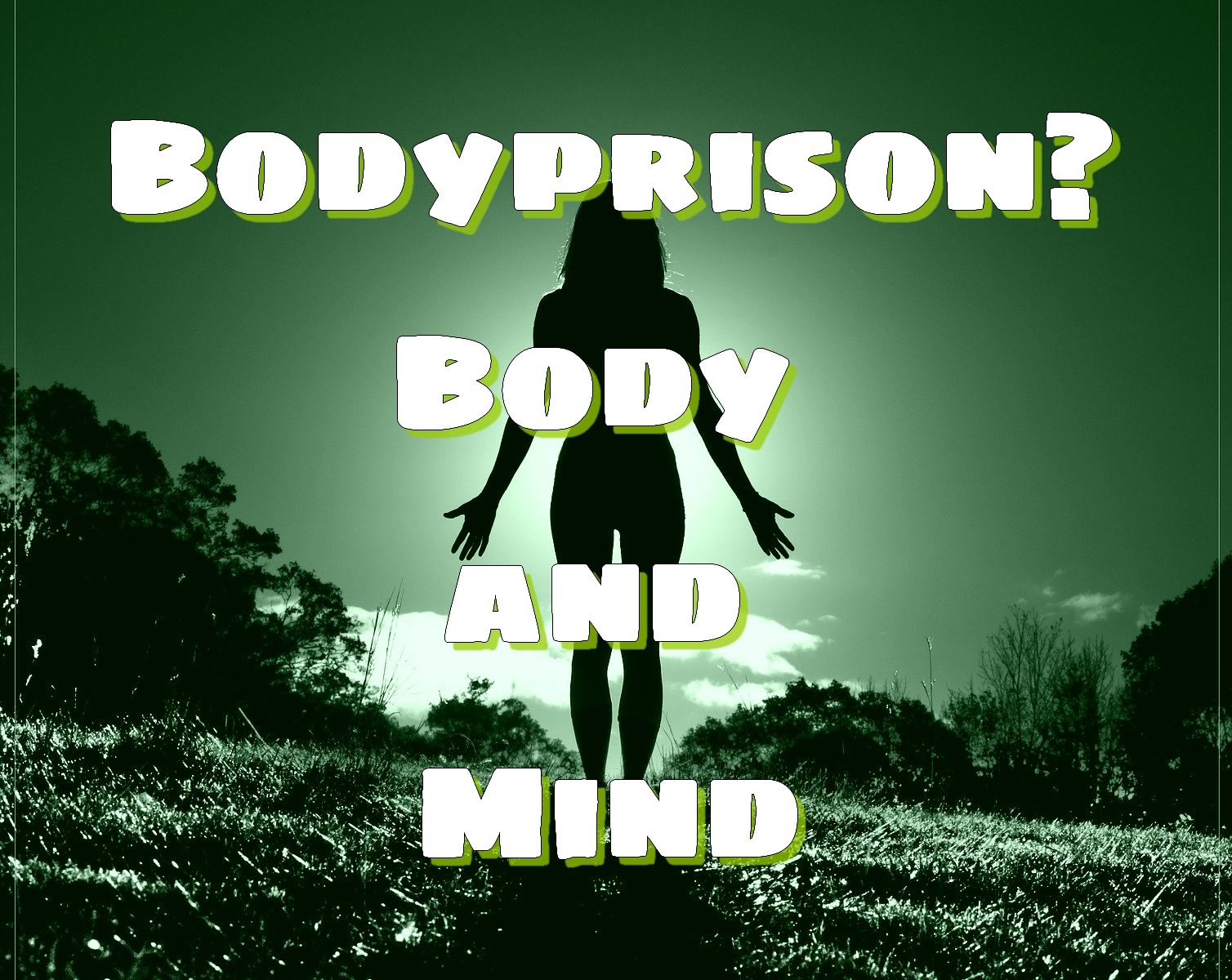 A subject – almost too big to write about. Very close to us, a sensitive terminology that needs to be handled with care. So please fasten your seat belts because we are going to ignore this principle. Let’s start with a few basics. Bodies are made of matter. Matter, that is what the whole universe visible to us consists of. In this respect, a small, relieving thought at the beginning, we are a bit closer to solitude.

The ultimate conclusion of all religions, the idea of ​​salvation through an overpowering God, always goes beyond the idea of ​​corporeality. You could also say that it always goes beyond matter. That doesn’t seem surprising when we look at what’s behind the matter. Matter consists of atoms, atoms in turn from the atomic nucleus, the shell that the electrons shoot at, as well as a few protons and neutrons that scurry around in the nucleus.

If we imagine the atomic nucleus as big as a soccer ball, it would be about 10 kilometers from this center point to the electrons – through NOTHING. That means we, more precisely our body, consists of 99.6 percent nothing. If we go one level higher, we are made of water, one level down, says Nobel Prize winner Hans-Peter-Dürr, who physically addresses our problem as an enlightened scientist – that there is no matter at all in the sense described to us.

The mind, the thoughts, our memory, the control center for our body, if we use science, is a neural network. Incredibly complicated, but that’s about it. A really nice picture that physics paints of our body. But away from all this theory, which, when thought through to the end, only underlines the great idea by means of abstract evidence. So, away from quantum mechanics and wave functions.

No description, however detailed, can put into words what we really feel for, with, through, in our body, which we equate with our self. Many people simply believe that the body is all we have. An expensive commodity that still needs to be polished up and invested in. Beauty, aesthetics as the key to life. Others rely on the mind. Which they reach through the senses of the body.

So the body is very obviously the focus of our interest. Bodies can love each other, bodies can hate each other, can attack, have to defend themselves. Physically, martially. Beauty. Force. Endurance. Frailty, infirmity, old age. A very big thing is given to us there. Indeed, bodies play the decisive role in this great illusion.

The body reflects the world?

If we look at the idea of ​​the body, step aside a little, we can see that all suffering, including happiness, the whole world with its meaning, the educational and social systems, our social status, our love, our life par excellence, is reflected on what is defined as a body, as a living body. Attachments, the Buddhist would say.

Life and death. The body is ephemeral, it only lasts for a certain period of time. As the holder of the Federal Cross of Merit, the Alternative Nobel Prize (Right Livelihood Award) H. P. Dürr recognizes, we consist of nothing (and everything), physics says of water – so it cannot be our body that affects our “life”. It becomes obvious that there has to be more. Our mind is not just thinking, it is expressed through the body.

The mind is the actual body?

Our mind, our thinking, gives life and meaning to the jumble of atoms. Our mind coordinates. If you will, it is the actual body. Understanding the tremendous importance of this conclusion is awe-inspiring astonishment. Because yes – we think. We think our body. The ego wants to prove us wrong, every second of our lives. And it brings in an infinite number of witnesses.

What are these witnesses? There is birth, sickness, sin, death. The differences between beautiful and ugly, between rich and poor. Between powerful and powerless, healthy and sick. This is the wheel of life. The wheel of impermanence? This is the home of the ego, guilt and attack, necessary defense. That is the empire of the body. Everyone all alone. Impossible to really unite, the love that is postulated in the body world is only surface.

No love in the body world?

Here, in these thoughts, the real love of creation has no entrance. This is a world that continues to separate itself from God in a fragmented view of things. As long as we are convinced that we are, as a body, part of this body world, we accept impermanence and suffering, sin and fear as our existence. Understanding, knowledge, cannot come to bodies. It is a matter of building the altar in the spirit.

The body is an end and not a means for us?

The point is very clear: you see the body as an end – not a means. All of your endeavors are aimed at making the body more comfortable, more pleasant. With this you unconditionally accept the rules of the ego. But: In order to escape this whole, appalling chaos, you don’t need more than to recognize it once. Once completely remove the body from your senses.

The body is fragmented time?

In no moment does the body even exist. It is always a mental anticipation or a memory. Only because the future and past of this thing seem to exist can it pass as real. And only because fragmented time is defined can sin, guilt, fear and despair also exist. In the now, in the absolute moment, in the holy moment, which opens up when the body is only completely removed from your mind for a very short time, the miracle happens.

In the now is the resolution?

That is the realization, the resolution. You return to your body, but in an awareness that has nothing to do with the before. As long as you dwell in the past and the future, it is not possible to accept this blessed moment. You are also unable to prepare for it without moving it into the future. But many spend a long time, their entire lifespan, in this state of preparation – and they certainly achieve success here and there.

The goal of absolute love?

It could be that you are on your way trying to achieve a goal that you have accepted.

But it is extremely difficult to want to fight against sin, to want to dissolve it – because that is how one manifests it. A tremendous, extremely stressful effort to try to see as sacred what you actually hate and despise. Just like the deep contemplation, the seclusion of the hermits, the long hours of meditation – all with the aim of letting go of the body. This preparation is simply unnecessary. .

Certainly, with no question whatsoever, these attempts, these paths of spirituality, are ultimately crowned with success. Just because their goal is love. But they are time-consuming and just as often unspeakably arduous. These means, which are used in good faith (in the truest sense of the word), are only oriented towards the future, with the aim of achieving salvation from a state of present inadequacy and unworthiness.

I don’t need to do anything?

“I don’t need to do anything.” This sentence, this conviction, implies complete trust, loyalty, undivided loyalty. Internalize this for just a tiny moment, and you will achieve more than all the time you spent contemplating and fighting temptation and sin. Understand: When you do something, you inevitably involve the body. When you understand that there is nothing to be done, you are pulling the body out of your mind. The „now“ opens up, a door next to the time, a shortcut. Time no longer exists here, because if you don’t do anything, you don’t need it. No sin and no time.

This is the place that the Holy Spirit seeks, where he is always available for you, the resting point in the chaos of the world, filling your inner center, amidst all the busy activities of the ego. Here the awareness is outside the body, the limitation that the body represents has come to an end. The body was made to limit the infinite. It is a limitation of love. As long as you rely on the senses of the body, you will not be able to see the real size that is all around you.

We undoubtedly see ourselves as bodies?

Now the body is an inescapable part of our existence. A part of creation, tool and instrument given to us to know. It stands to reason that it also represents a way of getting closer to the truth, the goal. We know that our body, actually everything, is light reflection, is energy. In Tantra one sees a connection between blockages of the energy lines in our body manifestations and the flow of cosmic energy, the Prana, around us. With appropriate physical exercises (this is where the connection between mind and body opens up!) It is possible to dissolve these „chakra blockages“.

Tantra practices the idea of universality

What we can clearly see here is the attempt to actively put the thing with the abbreviation into practice. This simply means, through concentrated activity, to transcend activity. To get to a point where energies flow freely, merge and lead beyond physicality. After a long, long practice to this point of inaction, which is then internalized.

There is nothing to do but nothing to do. Without question, the body’s path to this goal leads through tantra. Here, in Tantra, one of the many paths, body and mind ultimately come together in a kind of dissolution. A transformation is taking place. The attributes of life are changing. Tantra is not necessarily physical – rather it is an idea – the source idea of universal understanding that underlies tantraism.